Our four hour flight from Singapore,  into Mumbai arrived at 11:45pm.  Short queues at immigration and no need to go through custom security checks, meant that these processes were quick and we were on our way soon after midnight.

The streets were still so busy – tuk tuks, taxis everywhere, many, many people still lining the streets. It was noisy, car horns constantly tooting. More horror was experienced, as the magnitude and style of the slums were constantly seen as we drove past. Our taxi nearly did not make it up the short slope over  a bridge. Tooting tuk tuks easily overtook us as our old car just made it. Several stops were made along the way, as the driver was uncertainas to the locality of the hotel. He would leave us in the taxi unattended to find either well dressed citizens or other local drivers to seek advice and show the address to.

Finally after what seemed like hours, we arrived at our hotel to warm friendly safe looking faces who quickly unloaded our cases from the roof top (lucky none had fallen off) and escorted us into the pleasant, safe interior of our hotel lobby.

Although, I had prepped Hannah, my student, about the depth of poverty that might be seen, talked about the different cultures and completed research before leaving Australia, despite easing into different cultures by a stopover in Singapore,  cultural shock had set in and should the offer to hop on a plane and return to Australia immediately have been given to us, we may all have taken up that offer.

As daylight dawned, and a pleasant breakfast experienced in the back courtyard area, we all felt a little better.  A modern, air conditioned car complete with an educated hotel driver was given to us, to take us to the five star Trident, where my husband and I would stay and Hannah was kindly billeted out with a teaching family from the American School of Mumbai.

Why did we not stay there the first night – this hotel was much cheaper and due to the late hour of our flight, we did not want to worry anyone. However, it was an experience and another tale to add to the travel stories. It also taught me that no matter how much you think you are conditioned or prepared, reality is the only true experience! 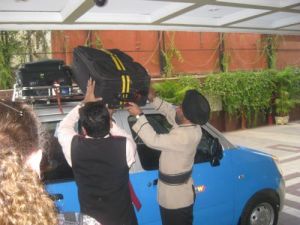 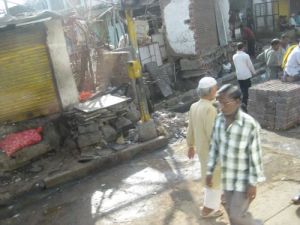 Area around the hotel